Manchester United will make a final £90m bid for Jadon Sancho next week in an attempt to prise the England winger, 20, from Borussia Dortmund. (Mirror)

Everton are lining up a move for Manchester United’s Argentina goalkeeper Sergio Romero, 33, as the pressure grows on the Toffees’ England international Jordan Pickford.(Sun)

Lucas Torreira is on the verge of leaving Arsenal, with both Atletico Madrid and Torino expressing interest in the Uruguay midfielder, 24. (Independent)

Atletico Madrid are confident of a loan deal for Torreira, which could allow Arsenal to sign the Spanish side’s Ghana midfielder Thomas Partey, 27. (Sky Sports)

Alex Telles believes Porto’s asking price to Manchester United of about 20m euros (£18.3m) is unrealistic because the Brazil left-back, 27, would be a free agent next summer. (Guardian)

Manchester City have said claims they made a £78m bid for Atletico Madrid’s Uruguay defender Jose Gimenez, 25, are not true. (Goal)

Paris St-Germain are preparing to pull out of negotiations to sign Alli on a season-long loan. (Telegraph — subscription required)

Chelsea and England forward Callum Hudson-Odoi, 19, is pushing for a loan move away from Stamford Bridge. (Talksport)

Barcelona and Brazil playmaker Philippe Coutinho, 28, could make a loan move to Arsenal before the transfer window closes. (Star)

RB Leipzig are close to signing a central defender which could mean defender Dayot Upamecano being allowed to leave the club. Manchester United have been heavily linked with the 21-year-old France international. (Star)

Napoli striker Arkadiusz Milik has been offered to Everton boss Carlo Ancelotti, but the Italian is lukewarm on a reunion with the 26-year-old Poland international. (Corriere della Sera — via Inside Futbol)

Southampton are also among the clubs interested in Loftus-Cheek, 24. (Mail)

West Brom could sign former Arsenal and Manchester City striker Emmanuel Adebayor, 36, if they cannot secure another striker before the end of the transfer window. (Sun)

Saint-Etienne defender Wesley Fofana could move to Leicester City but as part of any deal the French club want the 19-year-old to stay with them on loan for the season. (L’Equipe — via Leicester Mercury)

Help us tell more of the stories that matter

Bayern Munich will not allow French midfielder Michael Cuisance to leave on loan, despite Leeds United and Marseille reportedly being interested in the 21-year-old. (Sport Bild — in German) 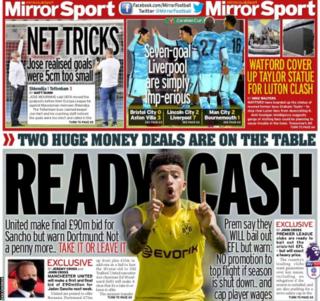 We hate SPAM and promise to keep your email address safe